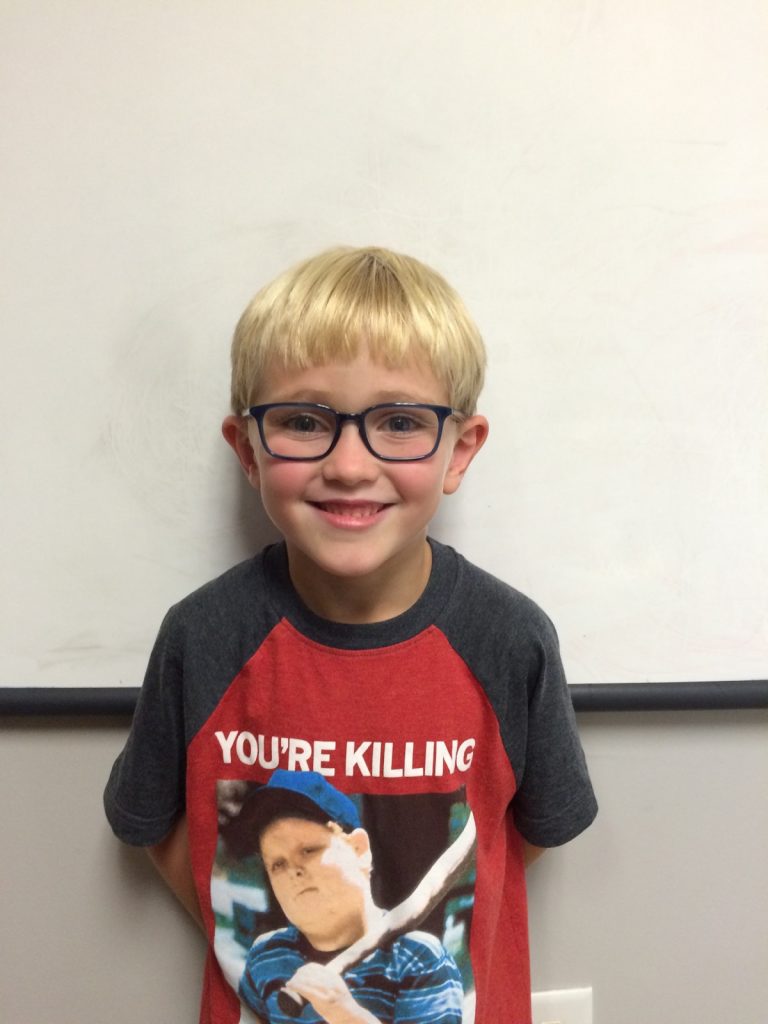 Henry was referred to Dr. Gesford by his primary care optometrist in Gastonia for vision therapy.  Henry is a sweet 8 year old boy who was having difficulty seeing well out of his right eye.  Henry had been wearing glasses since 6 years old; however, his current visual acuity was only 20/80 out of his right eye, while the left eye had 20/20 vision.  This condition, known as amblyopia, is commonly called a “lazy eye.”  Henry also exhibited a subtle eye turn inward (a type of strabismus known as esotropia).  His mom had noted difficulty with sports, particularly with catching or hitting a ball.  Henry actually said he would get scared when a ball came towards him because he was afraid it was going to hit him.

Henry’s amblyopia of his right eye was affecting his depth perception.  When the two eyes do not have equal vision, the eyes often have difficulty working together as a team, which makes it challenging to judge how far a ball or another person is from you.  Amblyopia can also make reading less efficient, interfering with reading comprehension, and can affect driving performance.

Henry completed a program of in-office vision therapy under Dr. Gesford’s direction.  His visual acuity improved from 20/80 to 20/30 in his right eye.  He also measured perfect stereopsis (depth perception) at the completion of his therapy.  The most exciting fact is that Henry now enjoys playing catch and is no longer fearful of the ball coming toward him.

Vision therapy is not just for kids.  Adults with amblyopia can have the same success with vision therapy as Henry did.

If you know anyone who has amblyopia, contact Dr. Gesford if you have any questions or would like to make an appointment!

Excellent personal care and service
- Walt W.
Have been going here the last few years and my experience is always good. The ladies in the office are always so helpful and friendly even as the last patient of the day!!! I loved that Dr. Veronica Schuver listened to what I was saying and recommended contacts lenses that really are a great fit after not being able to wear them the last few years. The personal touch goes a long way these days.
- Shannon M.
Great experience!
- Bart H.
Always a great experience when I am in the office. The doctors take their time with you and you never feel rushed.
- Mandy W.
I continue to frequent this establishment because from the first time until the present, I continue to feel valued, cared for and appreciated.
- Daryl I.
Most personable staff anywhere! Dr Ashe makes you feel like family and never hesitates to answer questions. She's the BEST. Highly recommend!!!
- Cindy J.
Very nice staff, clean office. There was some kind of mixup with my appt but they happily accommodated me, which was impressive. I was in and out in an hour for an exam, meeting with the doctor, choosing glasses and paying.. As a fellow healthcare worker I can definitely appreciate the efficiency of a well run office! Donna, Alyssa and Dr Schuver were great.
- Brianna M.
Adjust Text Size Normal Large Extra Large